As with all crises, the COVID-19 pandemic has exposed strengths and weaknesses in Canada’s health care system at all levels: public health, active treatment and physician services. While our jurisdictional architecture has proven both good and bad during the crisis, governments at all levels will need to collaborate to close all the other capacity gaps.

Canadians are rightfully proud of their health care system; the vast majority of our citizens value it as a defining feature of our citizenship. The current pandemic has resulted in unprecedented pressures being placed on Canadian health care, so how has the system fared, how is it holding up and what have we learned so far?

Like much else in the COVID-19 odyssey, the report card is mixed. In some respects, Canadian health care has held firm and performed admirably; in others, such as long-term care for seniors, the outcomes are abysmal. In terms of pandemic planning, Canada was caught flat-footed, but so was every other country in the world.

At times, Canada’s federal-provincial-territorial division of powers has caused real challenges in creating timely and coordinated responses. In the widespread take-up of tele-health prompted by the pandemic, the system has adopted new approaches that are likely to revolutionize the delivery of health care in the future.

At the broadest level, there are three sides to health care in Canada: public health, active treatment and the provision of physician services. Public health has always placed a distant second to the importance of acute care and doctors in the health care system. It has a broad mandate—the promotion of population health—and its normal concerns are such threats as seasonal flus, occasional outbreaks of measles, the opioid epidemic, obesity and sexually transmitted diseases.

The responsibility for pandemic planning is subject to peaks and valleys in political decision-makers’ interest—high importance in the face of events like SARS and H1N1—but receding as a top of mind issue as time passes and memory fades.

This reality, plus Canada’s federal-provincial structure, is what caused this country to be unprepared for the need for personal protective equipment (PPE) generated by COVID-19. Several months into the pandemic, Canada is still struggling to ensure access of front-line workers to essential PPE. This occurred for two reasons: first, the provinces allowed their stockpiles to dwindle and become out of date; and second, the federal government took a lackadaisical approach to maintaining the national emergency stockpile of this equipment.

At both levels of government, there were lapses in on-time replacement of PPE that had reached its best-before date. In addition, when the pandemic struck, the system experienced challenges related to distribution of supplies. In April, CBC disclosed that in 2019, the federal government threw out two million N95 masks and 440,000 medical gloves when it shut down an emergency stockpile warehouse in Regina. The masks had expired five years before in 2014. The absence of an adequate supply of PPE has led to a mad scramble by both the federal government and the provinces to source critical supplies in a chaotic and highly competitive market.

Now that the provinces are re-opening their economies stage by stage, Canadians are critically dependent on the implementation of massive “test, trace and isolate” measures across the country. These measures are essential to the country’s ability to detect possible spikes in community transmission of the virus if the pace of returning to normal is too fast. Testifying before the House of Commons health committee on May 19, Dr. Theresa Tam, Canada’s Chief Public Health Officer, said that the 30 testing labs in Canada have a daily capacity for roughly 60,000 tests, but on average, only 27,000 are currently being performed by provinces and territories. Ontario and Quebec have faced almost constant challenges in completing sufficient numbers of tests.

If an army marches on its stomach in a time of war, in a pandemic, public health officials and epidemiologists march on accurate and comprehensive data. They need to see the spread of the virus in real time to form effective responses and mobilize resources. This means timely data on positive cases and their location, the numbers of deaths and where they are occurring, the number of recovered cases and how many tests are being performed. On data collection and its dependability, Canada’s experience in 2020 is that the whole is not greater than the sum of the parts.

In reality, Canada has no national public health data system; once again our creaky federal/provincial/territorial structure gets in the way. As Dr. Tam told the Commons health committee in May, “We actually have national case definitions, but it’s up to the provinces and territories to…report to us according to the definitions, but sometimes that does vary and we do have certain data gaps that we must address.” In post-pandemic Canada, the absence of dependable data is a challenge that must be overcome.

In the early stages of the pandemic, significant concern was expressed that victims of the virus might flood this country’s active treatment capacity and collapse it, as occurred in such countries as Italy and Spain. With 57,000 hospital beds, Canada’s comparative ranking in beds per 1,000 people is the lowest of all Organisation for Economic Co-operation and Development (OECD) countries and our occupancy rates tend towards being the highest. Even in normal times, the persistence of “hallway medicine” is a major challenge for provincial health systems.

Likely due to the shutdown of the economy and the success of self-isolation and social distancing in flattening the curve, the much-feared run on acute care never happened in most provinces. There was one notable exception. Because of the virulence of the outbreak in Quebec, that province came the closest to catastrophe. In early May, an astounding 11,600 of its front-line health care workers were missing from the system—sick, quarantined or afraid to go to work. That situation persisted for weeks.

When the pandemic took hold in mid-March, provinces cancelled elective surgeries to protect their hospital capacities in the event of an influx of COVID-19 patients. As a result, thousands of Canadians can now be counted as the collateral damage of our chronically low number of active treatment beds. Based on an extrapolation of Ontario and British Columbia’s share of the population, the result is a backlog of as many as 189,000 delayed surgeries nationwide. These deferrals now need to be cleared, and B.C. estimates that it will take as long as two years. 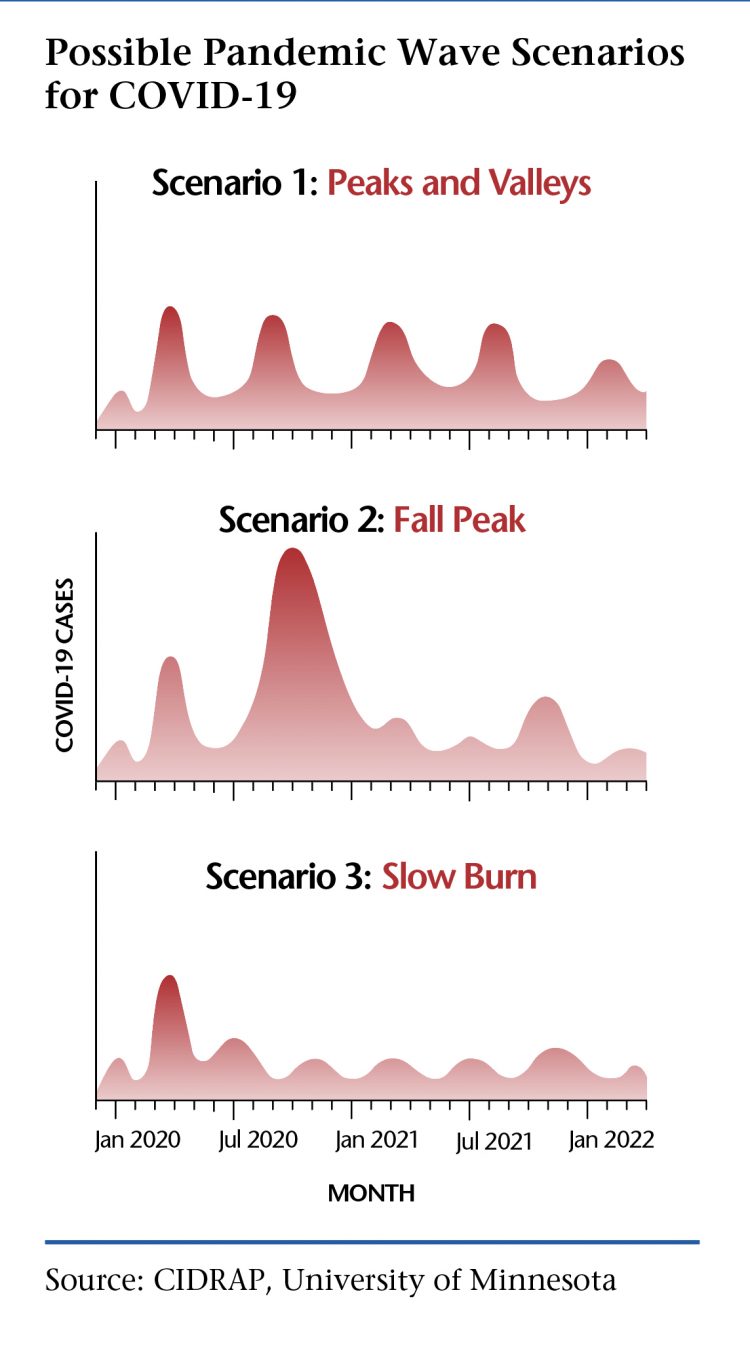 On the positive side of the pandemic, in just three months Canada has seen a sea-change in the use of telemedicine—the delivery of medical care and information using telecommunications technologies. With people warned away from hospital emergency departments and many physicians’ offices closed or restricting visits, doctors and patients quickly embraced access to and delivery of medical care through online platforms.

With the boom in the use of telehealth approaches, apps for doctor-to-patient interactions such as ZOOM, GoToMeeting and Doxy.me have proliferated. Patients without a physician can access one through Cloudmd, and Medimap now provides quick access to virtual appointments with walk-in clinics. The good news is that provincial fee-for-service reimbursement systems are beginning to catch up with these new realities. In April, British Columbia changed its physician payment models to accommodate virtual medicine.

The apocalypse that has befallen Canada’s frail elderly living in long-term care facilities stands as the greatest failure of our health care system in the current pandemic. It is also a searing national shame. Roughly 400,000 Canadians live in these facilities and as of late May, according to the National Institute on Ageing (NIA), 80 percent of all COVID-19-related deaths in Canada—5,324 out of a total of 6,599 deaths—were residents in long-term care settings.

With stunning prescience, a late-2019 study by the NIA counted the ways that long-term care homes were courting disaster with conditions that would spread infections: people living close together in residences that suffered from chronic staff shortages, and low-paid employees forced to work part-time in several different facilities.

These longstanding issues are complicated by Canada’s jurisdictional structure: 13 separate and often protectionist political and administrative systems; different standards from jurisdiction to jurisdiction; mixed public, private and philanthropic ownership, confounded by the lack of inclusion of these facilities under the Canada Health Act. When the pandemic is over, there will be a reckoning on long-term care in Canada; it will be painful and complex…and very expensive.

Epidemiologists and public health planners are quite certain that COVID-19 is far from done with Canadians and our health care system. A recent paper by the Center of Infectious Disease Research and Policy (CIDRAP) at the University of Minnesota argues that the best comparative model for predicting what comes next can be learned from the influenza pandemics that occurred in 1918-19, 1957, 1968 and 2009-10: “Identifying key similarities and differences in the epidemiology of COVID-19 and pandemic influenza can help envisioning several possible scenarios for the course of the COVID-19 pandemic.”

Based on the evidence from previous influenza pandemics and what is known about COVID-19, the researchers conclude that there are likely three possibilities for the future progress of the virus:

Scenario 1, in which the current peak is followed by “a series of repetitive smaller waves that occur through the summer and then consistently over a 1- to 2-year period, gradually diminishing in 2021.”

Scenario 2, where the Spring 2020 wave is followed by a larger wave this coming fall or winter and smaller waves in 2021.

Scenario 3, in which the current initial wave is followed by “a ‘slow burn’ of ongoing transmission and case occurrence, but without a clear wave pattern.”

The possibility of continuing stops and starts to economic activity to stem the spread of future outbreaks is a daunting prospect for both governments and the national psyche. At the very least it means the necessity of redoubling current efforts to put in place test, trace and isolate measures that are comprehensive and robust, as well as securing dependable supplies of personal protective equipment to prepare for the next wave.

Among the top-tier lessons we’ve already learned: prepare for the worst.

Contributing Writer Geoff Norquay, a principal of the Earnscliffe Strategy Group, is a former social policy adviser to Prime Minister Brian Mulroney and communications director to Stephen Harper in opposition.

The 2019 Federal Election – What Could Still Happen?
Election 2019, the Conservatives: Challenges and Opportunities
A New Chapter for North American Trade