Managing the Re-Opening of the Economy: Expect a More Divided Electorate

Written by Doug Anderson, Allan Gregg and Stephanie Constable for Policy Magazine on May 28, 2020. Click here to read the original.

More than two months after Prime Minister Justin Trudeau began briefing Canadians daily on the COVID-19 coronavirus pandemic that has now killed thousands of Canadians, Earnscliffe Strategy Group can report on the mood of Canadians expressed in a recent national poll. As with many other studies, we found remarkably broad national consensus on a variety of subjects: the perceived severity of the pandemic crisis; how it has impacted Canadians; and, how the public is assessing the performance of frontline workers, public health officials, governments and leaders.

The survey was conducted online using Leger’s LEO panel from a sample of 1, 913 respondents from May 6-14. 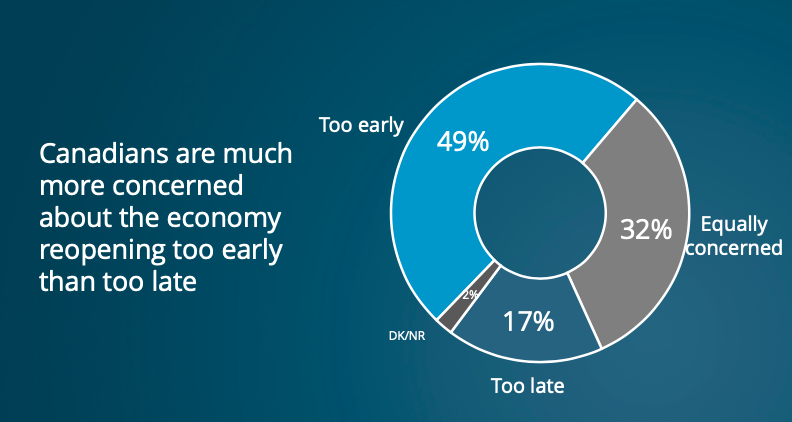 While it is hardly surprising to find the high levels of appreciation we found for frontline workers and first responders, one rarely sees endorsement of political leaders far outstripping partisan support. A majority of Canadians say the prime minister is doing a good or excellent job of dealing with the pandemic and in every province, a majority say the same of their premier.

High levels of endorsement normally breed public trust and, with it, a healthy degree of latitude for determining the best course of action. We are in a moment where there is an alignment of a singular focus of concern, a partisan cease-fire, a deference to experts, and appreciated actions that are producing what might be termed “peak endorsement.” But where does it go from here? Like a sort of political entropy, the consensus has the potential to break apart and our study provides evidence of the kinds of fault lines that are most likely to return us to a more divided electorate. 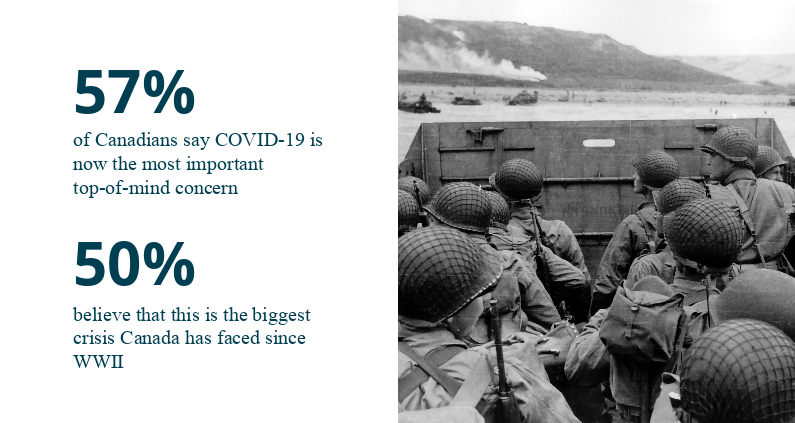 In our survey, we gauged the support for 20 potential policies that might be considered to address the next phase of the pandemic as the country switches from containment to staging a long, slow return to normalcy.

In terms of mitigating health risks, strong majorities can get behind the idea of continuing the kinds of physical distancing measures to which we have all become accustomed, particularly as people return to workplaces or visit retail outlets. Although slightly lower, majorities also support the limitations of gatherings at sports or entertainment events and even at family occasions such as weddings or funerals. Perhaps reflecting a new open-mindedness to innovative policy responses, there is even significantly more support than opposition to introducing a guaranteed annual income or helping the battered energy sector by compensating companies for converting to producing renewable energy.

On the other end of the policy spectrum, there’s a fair degree of opposition consensus towards measures like dramatically raising taxes to pay for the stimulus spending during the pandemic or cancelling tax debts owed by medium and large businesses. 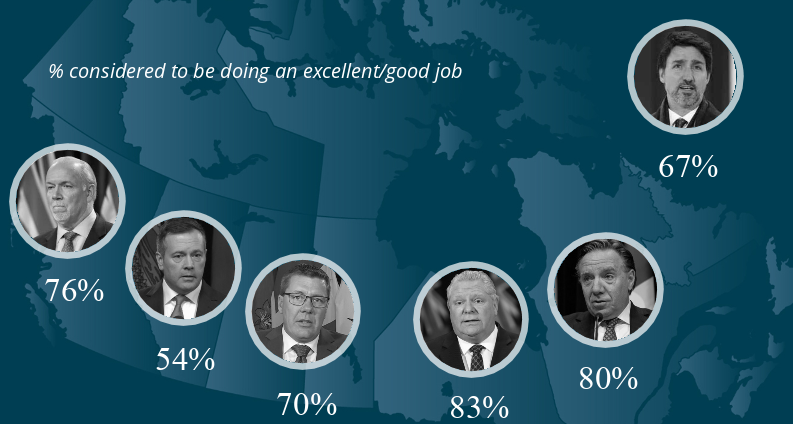 In between, we see a division of opinion on other responses that might be implemented during the re-opening, such as: initiatives that could be considered freedom-limiting such as banning unnecessary travel or even making it a crime to not get vaccinated; location tracking that might be considered privacy- infringing; and economic policies that could impact the role and size of government such as cancelling tax debts owed by individuals, putting an end to subsidies going to industries or nationalizing more companies. 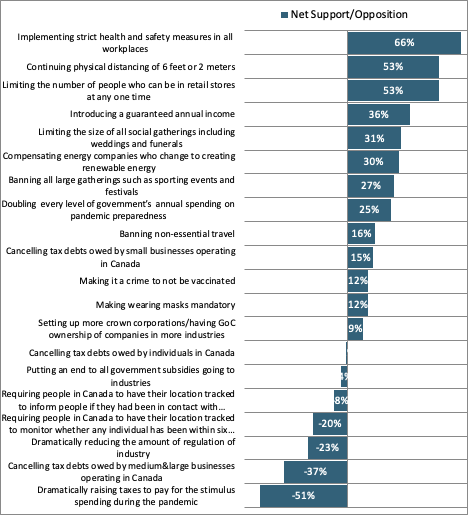 While these results clearly show where there is a national consensus or not, they hide a deeper division that lies below the surface of nationwide public opinion — indeed, divisions in the public that can be leveraged and exploited by those with certain partisan or policy interests.

In fact, what we find is that the Canadian population is actually comprised of three equally-sized segments of opinion when it comes to support or opposition to this list of possible public policy responses:

Taken together, what the survey has demonstrated is that the next, re-opening, phase of governing will almost certainly be more difficult than the crisis management phase and undoubtedly will result in more divided opinions than we have seen thus far in the pandemic. A short list of measures, particularly those involving mitigation of personal health risks, can be implemented with relatively modest opposition, but beyond those, expect a return to a more vocal debate, especially if initiatives revolve around issues such as privacy and government reach.

Doug Anderson, a Principal of the Earnscliffe Strategy Group in Ottawa, is a public opinion specialist, largely focusing on public affairs and public policy issues. Stephanie Constable, also a principal of Earnscliffe in Ottawa, is a specialist in polling insights and communications advice, notably branding and advertising strategies.  Allan Gregg is among Canada’s most recognized public opinion researchers and pollsters. A principal of Earnscliffe in Toronto, he now works primarily with consulting clients, associations and agencies.

Election 2019, the Conservatives: Challenges and Opportunities
The 2019 Federal Election – What Could Still Happen?
A New Chapter for North American Trade